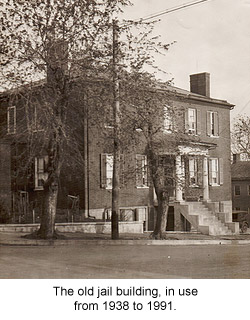 The Northwestern Regional Adult Detention Center’s origin begins in 1845 when the first Frederick County Jail was constructed on Cameron Street in the City of Winchester. That structure, which still remains today, incarcerated city and county offenders until 1979 when Frederick, Clarke, Page, and Shenandoah Counties joined the City of Winchester in a cooperative agreement to balance the distribution of offenders among the agreement participants.

In 1987, with overcrowding at most of the area’s jails a threat to the safety and security of staff and inmates, Clarke County, Frederick County and the City of Winchester formed a Regional Jail Board in accordance with Virginia Statute to begin the planning for a new Regional Detention Center. A 22 acre parcel in the Industrial park was selected on which to construct a 251-bed Main Jail and a 99-bed Work Release Center. Howard Shockey & Sons, Inc of Winchester was selected to begin the construction in 1989.

In 1998, Fauquier County became a member of the Regional Jail but maintained its local Sheriff’s Jail in Warrenton to facilitate pretrial and a select number of convicted inmates.

In March 2005, with populations approaching 420 inmates, the Regional Jail Board met and agreed to convert to a Jail Authority for the purpose of increasing the Jail’s inmate capacity through new construction. After concurrence by the governing bodies of each participating jurisdiction, the Jail Authority approved the construction of a 204-bed Community Corrections Center on an 11 acre parcel adjacent to the Main Jail and to add an 86 bed medium security housing unit to the Main Jail.